Felix the Cat is a video game released in 1992 for the Nintendo Entertainment System and in 1993 for the Game Boy by Hudson Soft. It is based on the cartoon character Felix the Cat. 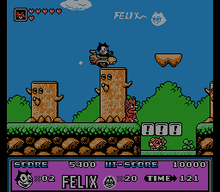 The player controls Felix the Cat as he sets out to defeat the evil mad Professor who has kidnapped Felix’s lovely girlfriend, Kitty. The Game Boy version plays virtually the same as the NES version, but features fewer levels.

Felix the Cat has simple game mechanics. The A button is used to jump (press repeatedly to fly or swim), and the B button is used to attack. The type of attack varies depending on the magic level. When Felix falls into the bottomless pit (past the bottom of the level), runs out of time, or loses all his health, he loses a life. Scattered items replenish health and magic. Enemies include moles, tree trunks, cannons, birds, fish, and eight boss monsters. Enemies generally follow a regular pace back and forth, and Felix can shoot them. If Felix takes a hit, his magic power goes down one level. If Felix is at the lowest magic power and gets hit, he loses a life. There are nine worlds.

”Whoever you are, get out! I will protect my home and my dear ones!”