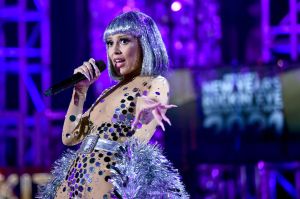 Doja Cat hasn’t put out a full-length body of work since 2019’s Hot Pink, but the hit album from the singer and rapper is still getting plenty of mileage. The track “Streets” from the record was part of the “Silhouette Challenge” trend and Doja replicates the moment in a new video for the song which also features dashing actor Kofi Siriboe.

As the seventh single from the 2019 album, “Streets” was a notable fan favorite and gained renewed interest after it was used artfully in a mashup track for the Silhouette Challenge’s sultry video backdrop on the second portion of the dance.

The song’s suggestive lyrics atop producer Blaq Tuxedo’s soul-stirring track make mention of a relationship that seemingly soured but is the one that the singer is longing to restore after realizing what’s out there on the “streets” doesn’t compare to the romance that was lost.

The video for “Streets,” which already has 1.5 million views and counting since debuting on Monday (March 8), features Siriboe as a taxi driver stuck in a traffic jam who happens upon Doja as a storefront mannequin who then flips the script into the red backdrop featured in the viral challenge videos. She then invites him inside the display for a focused lap dance.

As we’ve seen in times past, Doja rocks a skin-baring outfit while dancing closely on Siriboe as all he can do is take in the visuals from all angles while seated. In another scene, Doja gets into a black widow type of vibe as she ensnares her love interest in a web as she climbs towards him.  There’s a lot of good things going on, hence why Twitter is buzzing right now.

While Doja Cat is the star of the show and rightfully so, many are praising Kofi Siriboe as being a desirable sight within the video as well. Check out those reactions below along with the video.

i just gotta stan for a minute… @DojaCat with the streets music video, wow 😍🤤 the concept was genius x @kofi 👌🏽🙌🏽